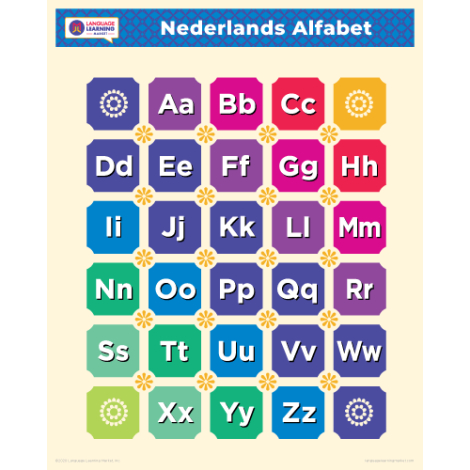 This is a colorful 16" x 20" | 8.5" x 11" alphabet wall poster in DUTCH NEDERLANDS to teach the ABCs in your preschool and homeschool curriculum. Print this educational poster to hang as the perfect decor accent in your classroom, nursery, bedroom or playroom. Dutch - Nederlands is spoken by around 24 million people as a first language and 5 million people as a second language, constituting the majority of people in the Netherlands (where it is the sole official language countrywide) and Belgium (as one of three official languages). Outside of the Netherlands, it is spoken in Suriname (S. America) and on the islands of Aruba, Curacao, and Sint Maarten. It can trace its origins to the Middle Ages and was called Dietsc, or Duutsc, historically equivalent to German Deutsch and meaning simply “language of the people,” as contrasted with Latin, which was the language of religion and education. Fun fact: Afrikaans is a daughter language of Dutch.