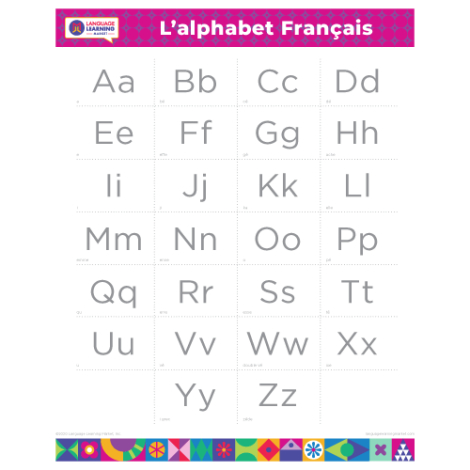 This is a colorful 16" x 20" | 8.5" x 11" alphabet classroom wall poster in FRENCH Français to teach the ABCs in your preschool and homeschool curriculum. Print this educational poster to hang as the perfect decor accent in your classroom, nursery, bedroom or playroom. Today, French - Français is the second most studied language after English and spoken by more than 300 million people around the world as first or second language. It is also one of the five official languages of the United Nations. Its dialects developed from the Vulgar Latin which was brought to Northern Gaul with the Roman conquest in the 1st century B.C.. Fun fact: French - Français has a great number of homophones, that is, words sharing the same pronunciation but with different spellings and meanings. This makes it easier to create tongue twisters. For example: Si mon tonton tond ton tonton, ton tonton sera tondu. – If my uncle shaves your uncle, your uncle will be shaved.