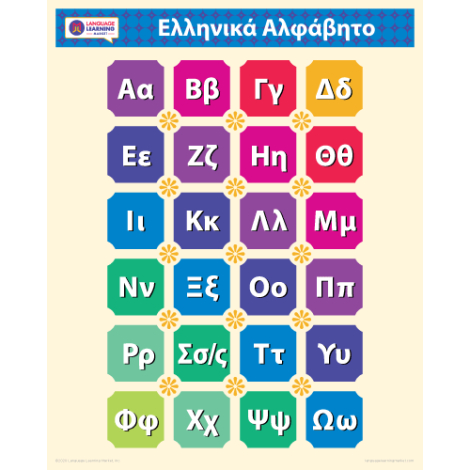 This is a colorful 16" x 20" | 8.5" x 11" alphabet classroom wall poster in GREEK Ελληνικά to teach the ABCs in your preschool and homeschool curriculum. Print this educational poster to hang as the perfect decor accent in your classroom, nursery, bedroom or playroom. Greek Ελληνικά is spoken by at least 13.2 million people today in Greece, Cyprus, Italy, Albania, Turkey, and the Greek Ελληνικά diaspora and it is the oldest recorded living language, with written records spanning over 34 centuries. It is a Hellenic language derived from Proto-Greek, the first form of Greek Ελληνικά spoken during the 3rd millennium BC. It later evolved into Ancient Greek Ελληνικάk, which was spoken during the Antiquity. Modern Greek Ελληνικά emerged after the fall of the Byzantine Empire in 1453. Fun fact: the word “alphabet” is actually formed of “alpha” and “beta”, the two first letters of the Greek Ελληνικά alphabet.