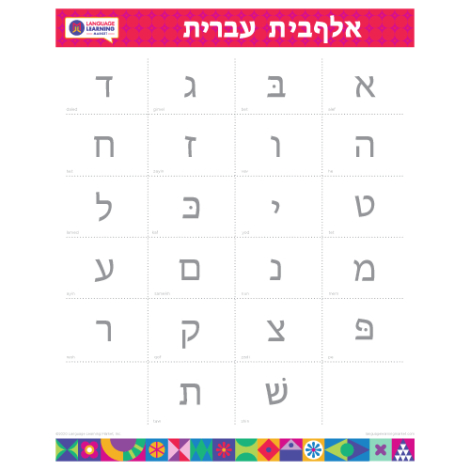 This is a colorful 16" x 20" | 8.5" x 11" alphabet classroom wall poster in HEBREW עברית to teach the ABCs in your preschool and homeschool curriculum. Print this educational poster to hang as the perfect decor accent in your classroom, nursery, bedroom or playroom. Hebrew עברית is spoken by at least nine million people worldwide with most residing in Israel and the United States. Spoken in ancient times in Palestine, Hebrew עברית was supplanted by the western dialect of Aramaic beginning about the 3rd century BC. Around 200 AD, Hebrew עברית died out as an everyday spoken language, even though it had existed for many centuries before. It remained dormant for over 1500 years until it was revived in the 19th century. During this dormant period, Hebrew עברית still existed in its written form, and was used in Jewish liturgy and rabbinic texts. Fun fact: pure Hebrew עברית words are always based on a three letter root word, just like Arabic which is a kind of sister language to it.