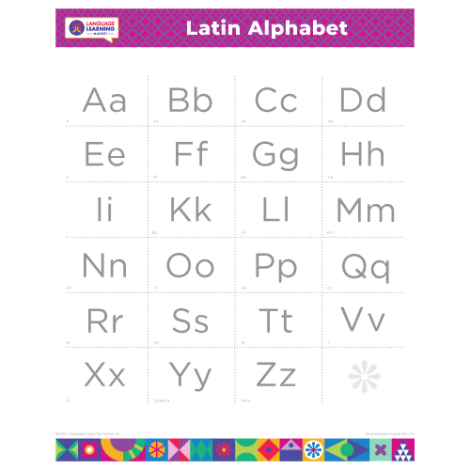 This is a colorful 16" x 20" | 8.5" x 11" alphabet classroom wall poster in LATIN Latina to teach the ABCs in your preschool and homeschool curriculum. Print this educational poster to hang as the perfect decor accent in your classroom, nursery, bedroom or playroom. Latin - Latina is considered a dead language meaning it is not used by people in their everyday lives but it is still very much alive in all the languages around the world as well most complex systems of nomenclature in education. Classical Latin - Latina was used in the 1st century BC, and was the official language of the Roman Empire. It was widely used in the Western part of the Mediterranean. The languages known as Romance languages developed from the spoken version, called Vulgar Latin. Fun fact: there are three genders in Latin - Latina-- feminine, masculine, and neutral.

No refunds allowed on digital downloads