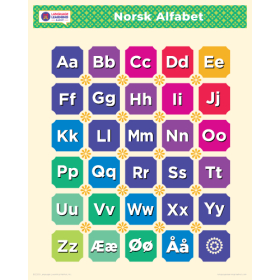 This is a colorful  16" x 20" | 8.5" x 11" alphabet wall poster in NORWEGIAN to teach the ABCs in your preschool and homeschool curriculum. Print this educational poster to hang as the perfect decor accent in your classroom, nursery, bedroom or playroom. Norwegian - Norsk is spoken as a native language by five million people in Norway. It actually has two official written forms. It was derived from the old Norse and later differentiated itself from Danish during the 19th century after its independence movement. Fun fact: Norwegian is a tonal language, making it sound lyrical. Tones are rare in Indo-European languages, and are more commonly found in Asian languages.

No returns on digital downloads